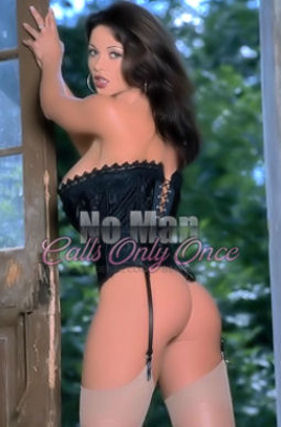 In part one, dated 8-30-19, I dumped my boyfriend and moved in with a hot blonde. I stumbled upon a beautiful man who was extremely well endowed. I dubbed him “Mr. Hillside”.

Of course the whole time Carly was penetrating me with her large strap-on, I was imagining being properly fucked by Mr. Hillside. I had orgasm after rolling orgasm and when our naughty interlude was over, I collapsed thoroughly exhausted, practically seeing stars. I knew what I needed to do next.

The next morning, I went out at the same time. I dressed casually for a hike. I was wearing short shorts and a zip up hoody. Beneath my hoodie, I wore a tightly fitted, low cut tank so that my breasts would be teasingly on display. I also packed a backpack full of supplies for my adventure into the hills. I was on a covert mission to meet the mysterious man at the top of the hill. After setting out and trekking it for a bit, I reached the area where I could view the house and the valley below without being seen.

To my surprise, I again, saw the hot guy in front of the window in his bedroom with a towel wrapped around his crowned jewels. He did his stretching in the sun and I was guessing that this was his morning routine before work. However, on this particular morning, after he completed his stretching regimen, he began to stroke his gorgeous cock. He stroked it at such a relaxed and leisurely pace and surprisingly, he did not cum. This struck me as a bit unusual. It seemed as if he just wanted to get it hard and move on with his day. In this moment, I knew that I just had to play with his cock and luckily, I was prepared!

“Do you live with your girlfriend perhaps?” I asked.

His answer sent a jolt of electricity straight up between my creamy thighs! I just flashed a sexy smile and then asked, “Could I trouble you for a drink of water? That hike up the hill was a tad more arduous than I had thought it would be. I’m feeling a bit overheated and quite thirsty. I’m actually even feeling a little light-headed.”

“Of course,” he replied. “Come on in and sit down. I’ll get you a drink.” I went in and stood by the kitchen bar while he prepared a chilled glass of water and then presented it to me in a cool retro looking glass. His home was just as dreamy on the inside as it was on the outside. Not a single thing appeared to be out of place. His kitchen looked like it came from a model home and it even had a pasta faucet above the stove! (Holy shit! Who is this guy?!)

His appearance was just as tidy. He had on a suit which looked freshly pressed and his sports coat and tie were hanging on a valet with his polished shoes placed right beside it. He had the full-on Christian Grey vibe going on and I was consumed by his personal intricacy and enchanting surroundings.

“I’m sorry; you must be getting ready for work. Are you in a rush?”

“It’s okay, I don’t have to be in at any particular time, but I do have a lot to do today, so I can’t hang out for too long. I can give you a ride home if you like.”

My thoughts were entering my mind like a bullet train…no wife or girlfriend and he wasn’t in a rush. Everything was working out perfectly.

“Do you mind if I use your restroom?” I asked softly.

He casually pointed in the direction of the downstairs half-bath and I sauntered down the stairs in front of him, giving him yet another opportunity to take in my perfect ass. As I stepped inside, I flashed another alluring smile. Once inside, I opened my backpack and pulled out a black corset and nude thigh high stockings. I changed quickly and as a finishing touch, I put on some sexy hoop earrings and a pair of classy black stiletto heels that were certainly not made for hiking, but absolutely made for fucking!

Earlier, I had caught him trying to steal glances of my breasts that were partially concealed by my hoodie. I could also pretty much feel him staring right through me from the moment I first arrived, so I was not at all concerned about what was about to come next (pun intended). After letting my hair down and fluffing it a bit, I opened the bathroom door and stood there with my hands raised and propped up against the door frame. I was hoping that the scent of my arousal wouldn’t be too overt, given how turned on I was at this point in my little game of seduction!

He turned to look at me, and his eyes nearly popped right out of his head. I could tell that he was struggling to remain calm and maintain his composure. Although, I knew that I looked far too irresistible for him to completely mask his emotion and giddy surprise.

I looked over toward the opened door in the living room and I began to walk toward it. I tossed my hair with my hand, ensuring that as I walked by, my raven tresses would flutter against his arm. I then grabbed onto the door frame and looked over my shoulder, asking him in a sex laden tone, “Are you enjoying the view?”

“It’s, um, incredible” he replied. “In fact, I don’t recall it ever being more beautiful than it is today.” I coyly bit my bottom lip and then said, “I noticed you were staring at my tits earlier.” He looked shocked, but before he could respond, I added, “How would you like to feel your hard cock sandwiched right between them, handsome?”