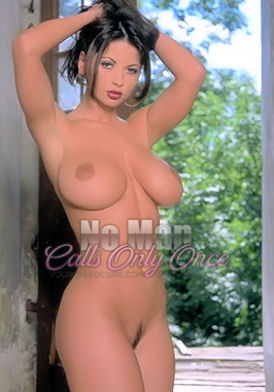 In part two, dated 9-6-19, I meet Mr. Hillside and begin using my powers of seduction to invade his mind and body through his cock.

Naturally, when I asked Mr. Hillside if he would like to have his cock between my tits, he was surprised, but he quickly regrouped. He stood up, walked over to me, put one hand behind my neck and kissed me while he reached behind with his other hand to squeeze my ass tightly. I put my hands on his hips and pulled him in closer. I felt his cock rubbing up against me as I felt myself going crazy with desire.

My hands went straight to the button on his slacks. I quickly had his pants and boxer briefs pulled partly down as I then knelt down to yank them all the way off. Once his pants were removed, and he had stepped out of them, I was finally able to take his cock into my hands. I longingly looked up at him and wrapped my lips around his bulging mushroom head.

I then placed my right hand at the base of his cock and encircled his leg with my left arm. This allowed me to run my fingernails up and down his inner thigh while I took more of his hard cock into my mouth. While I gave him head, my free hand made forays to tickle his balls and dig my nails into his firm ass.

He was just about to burst, but I stopped and stood up promptly. I felt a little guilty about taking him that far without letting him finish, but I knew I’d make it up to him. I wanted his first shot to be blown inside of me. I then laid down on a soft throw rug in his living room and removed my corset and thigh highs.

After I spread my legs, he ran his tongue over his lips and walked over to me. He bowed before me, and began licking. I thought Carly was good when it came to eating my pussy, but Mr. H was certainly no slouch, and it wasn’t long before I was in the realm of orgasmic delight!

As much as I was enjoying his smooth tongue technique, that’s not why I was there, so I rolled over and got on all fours. I reached back and parted my wet pussy lips, urging him to enter me. He quickly accepted my invitation and before I knew it, he was buried deep inside of me. I knew he couldn’t last long after all of the teasing and elongated foreplay he’d already encountered, but that was okay, I was primed and ready. I reached back and gave his balls a little squeeze that sent him straight into a colossal orgasm. Each spasm and stream of cum felt like an out of control fire hose going off inside of me causing loud moans of ecstasy to escape my lips.

After he was spent, he stayed semi-hard for a surprisingly long time inside me. Maybe that was because of the great view he had of my ass, or the way I was squeezing his cock from the inside.

When he finally slid out, he collapsed on his back next to me, and laid down on my stomach.

“I’m sorry,” he said, “but I really need to get to work soon, and I have to start getting ready all over again.”

“Are you sure you can’t stay just a little longer?” I asked, “I did promise you a titty-fuck.” He glanced down at my side-boob and I knew I had him. After he said that he could indeed stay a little longer, I asked him if he had any oil. When he replied that there was some olive oil in the kitchen, I told him to go and get it, and then I rolled over on my back.

After returning, he handed me the oil and he watched spellbound as I rubbed the oil all over my beautiful melons. He was partially hard when I told him to straddle my stomach. After he did, I stroked his cock with my oily hands until he was fully hard again. I then pulled him down and slid his cock between my slippery breasts. He started to rock back and forth as I kept him sandwiched between my tits tightly. It didn’t take long for him to cum again and I thoroughly enjoyed it as he shot his hot cream all over my luscious tits and stomach.

Being a gracious gentleman, when he recovered, he got a warm, wet towel and cleaned me off. He then said, “I’d love to spend the day with you, but I really do have to get a move on.”

“No problem,” I said as I got dressed. I’d gotten exactly what I’d wanted. Once I was dressed, I kissed him goodbye and walked back down to the cabin. Carly had a cougar-like ability to pick up scents, so I took a long, bubble bath to get rid of any lingering man-scent. While soaking, I relived every moment of our morning together.

My relationship with Carly ran its course and I moved back to the city to start grad school. To this day, whenever I take a bubble bath, I reminisce about the man in the house at the top of the hill.

I promise that I’ll give you something to reminisce about too!