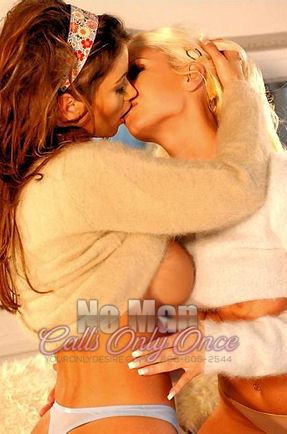 During my first summer after graduating college, I encountered my first sexual relationship with a woman. She was a very sexy and charismatic girl named Carly. Carly was a buxom blonde who had a very carefree and spontaneous nature, not to mention a silken tongue that was quite skilled at navigating my erogenous zones.

I first met Carly at a lavish costume party. At some point in the evening a game of Truth or Dare began and my boyfriend at the time foolishly (as he would later realize) dared me to kiss the girl next to me. As soon as our lips locked and I could feel her velvety tongue mingling with mine, I knew that I had to further experience what that warm, magical muscle of hers was capable of doing to the rest of my body.

So, over the next few weeks, Carly and I became more intimately acquainted and she and I started spending all of our free time together. My relationship with my boyfriend started to take a backseat to the newfound pleasures that were swirling between Carly and I. Sadly for him, he soon became my ex-boyfriend. (Careful what you dare someone to do during Truth or Dare.)

Carly lived in a secluded, foresty area well outside of the city where I had gone to school and she worked full time. I was going to be starting graduate school in the fall. She asked me if I wanted to come up and stay in her cabin over the summer (free of charge- major perk). She would be commuting back and forth to work during the week so I would have the place all to myself most of the time. This sounded like an opportunity that was too good to pass up, so I gladly accepted her invitation.

I was enjoying our exclusively girlie trysts even though I knew that they were likely just a passing fancy of mine. (Don’t judge me for taking advantage of free room and board from a hot girl with an eager tongue! I’m sure you would have too.)

One of the activities that I thoroughly enjoyed while living in the woods was going out each morning with a pair of binoculars and looking for birds and other wildlife. One morning I saw a hawk fly over the trees in front of me. As I followed his path, I say “he” because he flew with a grand air of masculinity about him. I watched him soar high in the sky for as long as I could until he flew out of my sight range.

I moved my binoculars about in hopes of discovering something just as enthralling to set my sights on. Soon I noticed a quaint house at the top of a hill. I stayed focused on the charming house for a quite few minutes because I liked the way it was nestled up high over the valley below where Carly’s cabin was situated.

Just when I was about to move on to sightsee a bit more, a man stepped in front of an upstairs window. He was wrapped in a towel from the waist down. Presumably, this was his bedroom window and he had just taken a shower. He was a very good looking guy and he definitely had my full attention as I zoomed in on his face and chest. I was pretty hidden among the trees and far enough away that I knew he couldn’t see me. (It was a good thing too because Mr. Hillside had me salivating.)

Just when I thought the view couldn’t get any better, he removed his towel and tossed it to the side. He stood in front of the window, completely naked, stretching his gorgeous body in the morning sunlight. My binoculars were aimed directly at his cock. He had the stance of a god. He extended his arms and arched his back for a minute and then turned around and slowly walked away. His ass was sexy as hell and his athletic build was just as impressive from the back as it was from the front!

I could feel myself getting aroused as my panties were starting to bunch up and cling to my moist pussy lips. I hadn’t been with a man since I started living with Carly and I was thinking about how hungry I was for cock after seeing his glorious body on display in the buff.

I spent the rest of the day thinking about this guy in the house at the top of the hillside and when Carly came home that night, I made it abundantly clear that I was “in the mood”. She probably wondered what had gotten into me, but I’m a sexual girl and I can be pretty damn beguiling when I want something.

After taking my cue, we started to embrace and make out. It was in a gentle fashion at first and then kissing with more and more fervor ensued. Soft moans escaped our lips as we pressed our breasts and bodies together, our legs entwining like ripened vines.

Then, I reached into the nightstand drawer that discreetly housed our vast collection of toys. I picked out one of several strap-ons (the one that looked most like Mr. Hillside’s phenomenal package). I breathlessly asked Carly to put it on and take me from behind. She was a bit taken aback as we rarely used this particularly, ahem…“large” toy, but she was obviously excited and more than willing to oblige my request.

I raised my perfectly round ass into the air and allowed her to penetrate my ripe pussy. I pressed my face into the pillow and dug my fingernails into the sheets, begging for her to give me her cock (just as I beg you for yours too, baby).