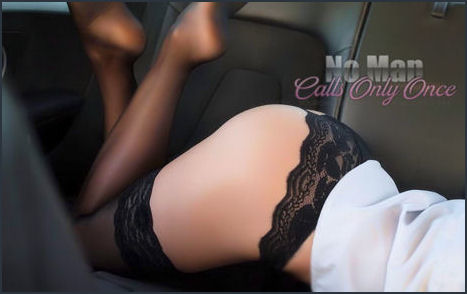 The second I undid the buttons on my blouse and slid my skirt down to slide my hand inside of my panties from the backseat of your car, the traffic slowed to a near standstill. “Oh, God no,” I said, with just a hint of a whine. “I was just starting to have fun.” All around us the cars slowed down and instead of zipping by us, barely able to get a glimpse of anything at all, It was suddenly apparent that the other drivers might, in fact, notice a smokin’ hot girl like me moving her hand back and forth between her legs.

“Don’t stop,” you said to me, risking a quick glance in my direction. “Are you serious? People can see me.” “I know, Ash. It’s terrible. Whatever will they think?”

“This isn’t fair,” I said, squirming as I looked out the window. The woman next to us was busy on her phone, but she passed us by in a few moments to be replaced by an old man with his chin to the wheel. He was definitely not going to be distracted by anything I did.

“Why don’t you pull them down?” I know you said this to see how far I was willing to go. I looked at you, back out the window, then back at you once more. And with a wiggle and a little tug, I slid my panties down just enough that you could clearly see in the rear-view mirror that my fingers were moving between my creamy thighs.

“Anyone can see me,” I moaned, closing my eyes for a moment. “Be adventurous and open your legs wider,” you whispered as you reached back and pulled one strap off of my shoulder. You tugged at it harder as you watched the road until my left breast was exposed. It took every effort you had to keep your eyes on the car in front of you.

“Fuck, this is kind of hot,” I said, looking up again as I touched myself faster and harder. Another car moved into the spot next to us. This time it was a college kid who smiled in our direction and waved at me before pulling ahead. Then it was a couple, both of them pointing before we overtook them.

“No,” I mumbled, avoiding the window as each car drew close. “OMG.”

“What is it?” you asked, turning quickly to see an SUV riding alongside us. The man inside was apparently more interested in watching me pleasure myself than he was in following the flow of traffic, and for the first time since we slowed down, there was a car next to us that didn’t move.

“What’s he doing?” You asked, being careful not to rear-end anyone. “He’s just watching and smiling at me. I can’t look away.”

“He’s looking at me like he wants to devour me. He’s grinning and each time I moan, he licks his lips.”

“Pull your panties all the way down,” you said, adjusting yourself through your pants.

“Holy crap, babe! This is crazy and hot, but you are driving for God’s sake. Both of us should just stop.” I whimpered for a moment, but without looking away from him, I slid the lace between my legs down until he had a completely unobstructed view of my fingers teasing my wet pussy.

“Is he still watching?” you asked, already knowing the answer.

“Ask him if he wants to fuck you,” you said, wondering once again, if I would do it.

“Oh, God,” I said, pushing two fingers deeper inside my aching pussy as the entire car began to smell like my sex juices. Your free hand was on your hard cock, gently rubbing it through your thin slacks as I started to play with my left nipple, never once looking away.

“Ask him again. Say it over and over again until you’re sure that he can make out the words,” you said.

Then the words began slipping from my lips like a mantra, and you came close to crashing a hundred times. But I didn’t stop touching myself, and you didn’t pull ahead, and my voice was a silent question that needed an answer.

“He’s saying yes over and over again. He’s telling me nasty things. He wants me to pull over so he can “use my little pussy.” He wants us to stop at the next exit so he can fuck me while you watch.”

I was clenching my fingers all around and moaning as I arched my back and closed my eyes. You could see me in your peripheral vision shaking and biting my bottom lip as I moaned loudly and came incredibly hard.

Then for a split second, you saw the driver with a huge smile on his face as he gave you a thumbs up through the open window of his SUV.

Just as I began to regain my breath, and just as you nearly burst from your slacks, the traffic started to open up.

I looked up once more and smiled, and then he was gone, speeding in front of us before cutting over to the right lane, passing back to the left, and then vanishing into the once again moving string of cars.

I buttoned up my blouse and then pulled up my panties as well, and the fading light outside the window finally started to obscure us both. You reached back and touched my knee as I settled back into my seat with a contented sigh.

“Geez, that could have been a disaster,” I said. “I can’t believe we did that. I’m blushing so hard. I feel like such a filthy little girl.”

“I think I liked flirting with disaster.” (Wink*)